Can You Mount A Curved-Screen HDTV Monitor Onto The Wall?

Curved TVs aren’t quite the sensation they were when first introduced to enormous fanfare a few years ago. Sales numbers didn’t measure up to industry expectations, and many major manufacturers like Samsung, Panasonic and LG are playing down their curved-screen models these days. But these “immersive experience” screens are still very much with us and many people have chosen to build their home theaters around curved HDTVs.
There’s one important question that comes to mind when looking at a curved screen and envisioning it sitting in the middle of an impressive home theater, though: can you mount this thing on the wall?

The answer, unfortunately, isn’t as easy as you might like. Many curved screen monitors can indeed be hung on the wall, but it really depends on the model as well as the TV wall mount you want to use. And if you choose a curved TV that shows off the benefit of the technology to best effect, you might not want to hang it on the wall by yourself

We’re sorry this isn’t a “yes or no” type of question, but to fully answer it we first have to explore the pros and cons of curved-screen HDTVs.

The major advantage to using a curved screen in a home theater is that viewers are sitting in the “middle” of everything. The theory is similar to the concept behind IMAX theaters; the curve of the screen wraps around the audience, making the viewers feel that they’re fully immersed in the action. That’s why IMAX films provide such amazing video and audio sensations. Here’s the problem. In a theater, the screen is huge – so large that it’s able to wrap all the way around the seating area and put the entire audience inside the curve. In a smaller home theater, however, it’s almost impossible to recreate that experience. (Home IMAX theaters are available, but at nearly-prohibitive prices). When you’re watching a curved HDTV the monitor is much smaller so the curve is much smaller, and only viewers sitting directly in the middle of the curve will benefit from the immersive experience. That position is known as the “sweet spot” and it’s located dead-center, directly in front of the screen and closer than the normal viewing distance for flat screens would be.

You can probably guess what that means. For smaller curved-screen TVs, only one or two people can fit into the sweet spot. Anyone sitting elsewhere in the room will miss out on the real benefit of watching a curved monitor, and as their viewing angle increases they’ll start to notice picture distortion and annoying reflections. Curved HDTVs that are smaller than 65 inches really do what they advertise when you’re watching by yourself and sitting in optimal position. Otherwise, you need a screen that’s 65 inches or larger for a group to experience the immersion promised by curved screens.

What does all of this have to do with mounting a curved-screen TV on the wall? Basically, it means there’s a catch-22 for people who want to hang their own monitor. Most TV mounts available to consumers can only handle a maximum screen size of 70 inches, so if you’re looking to use a curved screen to best advantage you’ll be limited to one that’s between 65 and 70 inches. Larger curved screens will provide a better viewing experience, but will likely require professional installation if you want them hung on the wall.

For owners of curved TVs that fit into that narrow window, or those who don’t mind the viewing limitations of smaller curved screens, the news is basically good. Most of those monitors can be hung on the wall – with a few exceptions and caveats.

We’ve said the news is “basically” good, because the first generation of curved-screen TVs from manufacturers like Samsung and LG weren’t designed for wall mounting. Unfortunately, there’s simply no way around that problem. You’re out of luck if you ran out and bought a cool Samsung OLED curved HDTV as soon as they were released.

Most of the curved monitors sold since 2015 are compatible with standard wall mounts, however. As long as your HDTV has VESA mounting hardware (VESA is the industry-accepted standard for TV mounting, with screw holes placed in specific locations on the bracket), you should be all set. Just be certain you’re also using a VESA-compliant TV mount.

There’s one other potential problem. Some low-profile mounts are designed to keep flat screens as close to the wall as possible. They’re usually called fixed mounts because they are attached nearly flat against the wall, and aren’t able to swivel or tilt the screen toward specific viewing positions. These mounts are the easiest to install and the least-expensive choice – but because no arm extends from them, it’s extremely difficult to attach a curved screen to them. Tilt wall mounts will be more accommodating, but the best choice is a full-motion mount. 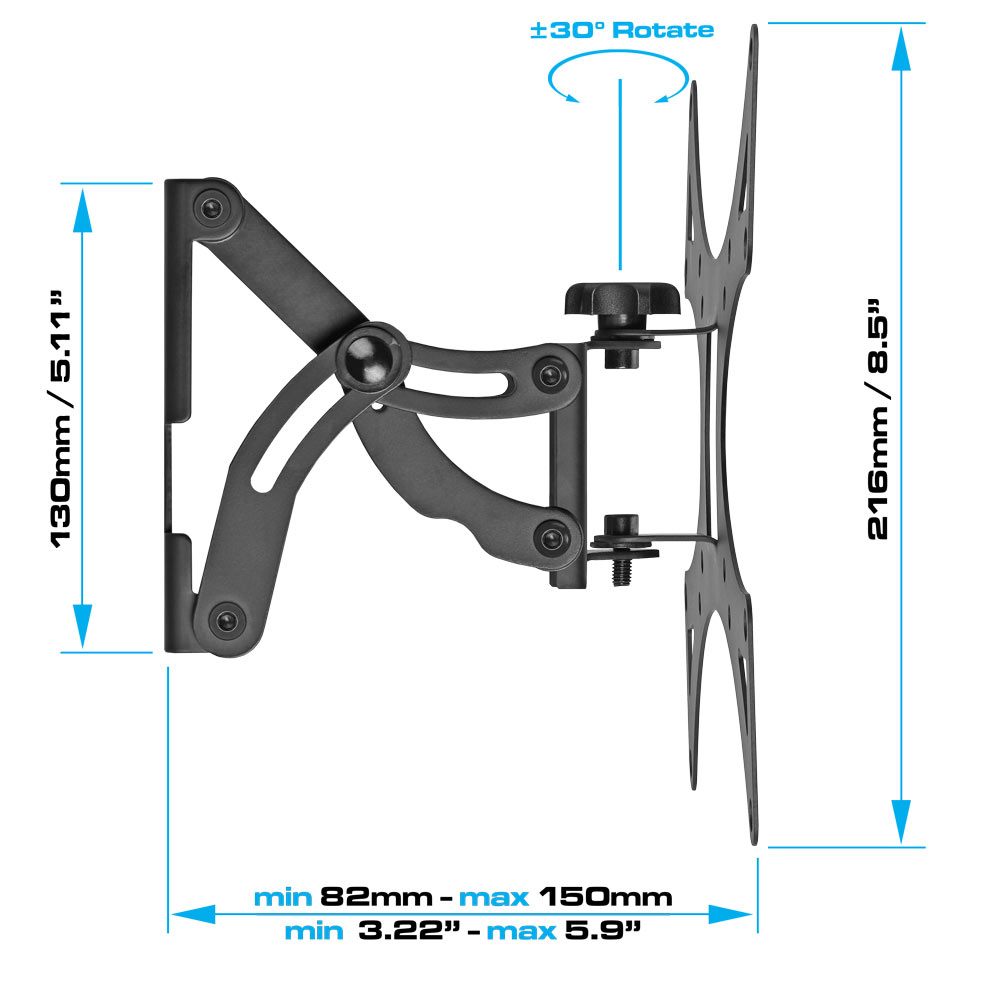 Before you buy a bracket and pull out your screwdriver and level, here’s one more thing to think about: curved screens mounted on the wall can look a little odd. After all, the entire concept of wall-mounting was based on making flat screen HDTV monitors as unobtrusive as possible. A curved TV, though, will stick out at each end. That may be fine with you, but be sure to measure how far out from the wall your HDTV will curve before moving forward.

Get a Feel for Curved TV Wall Mounts

As mentioned earlier, you can attach any mount that is VESA-compliant to your curved-screen TV, and all but fixed mounts are good choices to explore. One of the best ways to do that research is by checking out Cmple’s extensive selection of TV wall mounts – because they can all handle curved screens.

All of our mounts are VESA-compliant, and most of our larger ones can accommodate monitors that are between 37 and 70 inches. That’s the right size for nearly any curved TV on the market unless you’re opting for a monster-sized HDTV which would be best mounted by the pros. We carry both tilt- and full-motion mounts, so spending a little time looking deeper at the options will give you a very good idea of what you’ll need to put that mini-IMAX screen on your wall.
0
Featured products