The New Nintendo Switch System: Gaming At Home Or On The Go

Nintendo didn’t have a terrific 2014-2016. The Wii U wasn’t the success that was expected, and although the 3DS dominated the mobile gaming device arena (much as the Game Boy did before that), overall profits were way down and the company didn’t feel it should create a new hardware product to compete with smartphone and tablet gaming.

Nintendo finally came up with a new approach: a gaming console which can also be removed from its docking station for portable tablet play or placed on a table for group play. The project, originally developed as the Nintendo NX, is finally real; it’s called the Nintendo Switch because you can easily switch play modes on the fly just by pressing “L” and “R” on the controller at the same time.

The system will be released on March 3 at an initial price of $300. Some are speculating that nostalgia for the old Game Boy systems or desire for an “upgraded” 3DS will drive sales of the Switch. However, it appears there’s not enough crossover between the systems for nostalgia to be a major force (games will not be backward compatible, either); the Switch will have to stand on its own.

The Switch features a 6.2 inch LCD high-resolution screen with what are called “Joy-Con” controllers; each can fully act as a standalone, each with an infrared motion controller built in and able to distinguish hand gestures. The only real difference is that one controller supports Amiibo figures and the other can share screenshots. When the Switch is used in portable mode and the controllers are detached, the touchscreen with haptic technology is activated. 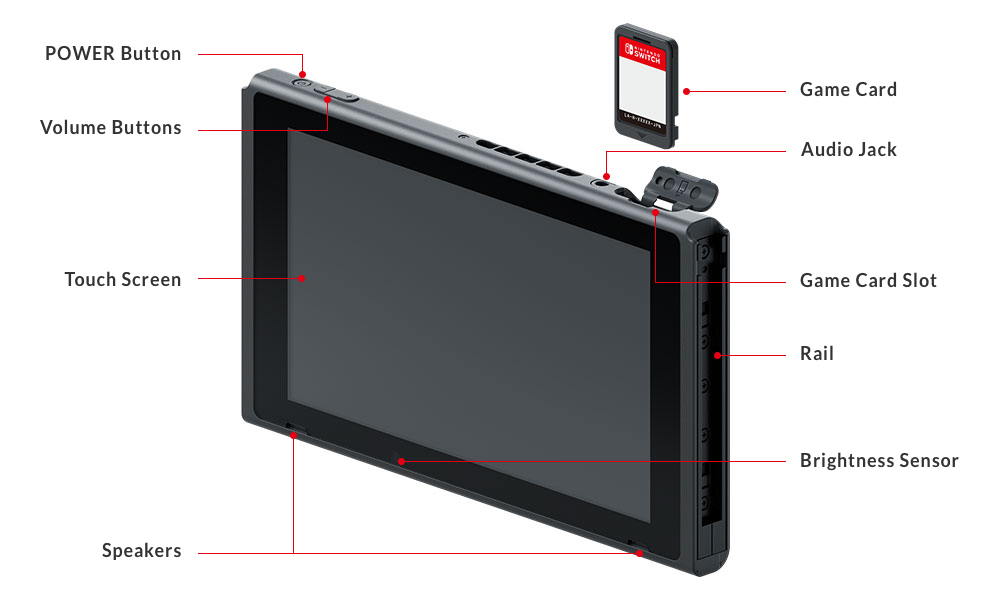 The unit has an Nvidia Tegra processor and 32 gigs of storage with expansion capacity up to 256 gigs with expansion cards, and games are cartridge-based (although not interchangeable with other Nintendo game cartridges, as previously mentioned). There are two speakers and a headphone jack, and battery life will range from 3-6 hours. The charging port is USB-C; the system can connect to your TV (or also be charged) with a HDMI cable, there’s 802.11ac WiFi support (with up to eight player console capability) and a USB LAN adaptor is also available.

Nintendo’s new product lives up to its name when it comes to switching between modes. The unit slips easily in and out of the dock, has a “kickstand” for tabletop gaming, and the Joy-Con controllers (which are much more effective than Wii controllers) tuck in nicely on the console’s side. And even though the controllers are still attached, the Switch is small and easily used in handheld tablet mode.

As with any new product, games for the Switch are frantically being produced. Already ready to go are Switch versions of The Legend of Zelda, Mario Kart 8 Deluxe, Super Mario Odyssey, Pokemon and a number of other intriguing titles; later in 2017, Nintendo also plans to release a paid Switch subscription service which will accommodate online multiplayer gaming and a voice chat app (although it won’t be StreetPass or Miiverse).

It’s unlikely that players will abandon their 3DS units en masse in favor of the Switch; the Switch is more expensive and its true strength is in console mode. The real play here is whether Nintendo has put its finger on the next frontier in gaming – a hybrid home/portable unit – or if it will have another dud on its hands.