There are two major goals to keep in mind when setting up a home theater or audio/video system; for that matter, the same goals apply when simply setting up a new HDTV or component. The viewing or listening experience should be terrific, and ugly cables or equipment should be tucked away somewhere unobtrusive instead of sticking out like a sore thumb. 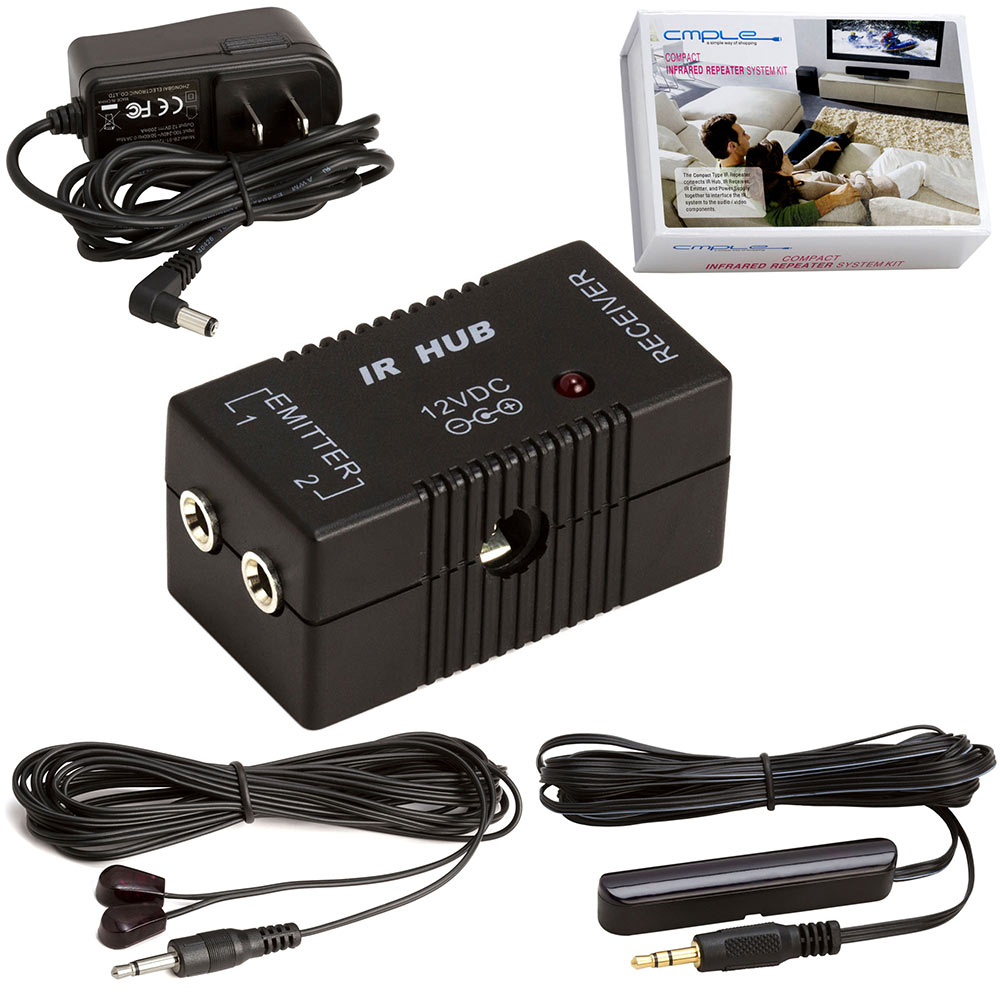 With the right components and cabling, the first goal is easily accomplished. Unfortunately, the second one can be tougher. Placing components out of sight in a cabinet, closet or other hidden area makes all the sense in the world – but that doesn’t mean that your remote controls will still work when their signals are being blocked by cabinet or closet doors. The remote control issue forces many people to decide between trying to make shelves or stacks of equipment look as attractive as possible, or getting up from the couch every time they want to change the channel or the volume.

Infrared (IR) repeaters are an inexpensive and effective way to solve this dilemma. A good IR repeater will take all of your remote control’s signals and convert them into signals which can reach your concealed equipment, and a repeater is simple to install and use.

How Does An IR Repeater Work?

You probably know that remote controls work by sending infrared light signals to the equipment they control, and you might remember from high school science that the frequency of infrared light is so low that it cannot pass through solid objects like walls or doors. (It can pass through some types of glass, but not others.) Infrared light also doesn’t “bounce” well, so it can’t go around corners, either; it’s in the same general spectrum as visible light and is subject to most of the same limitations. That’s why remotes won’t work with concealed equipment, and why you need an IR repeater to provide a work-around. 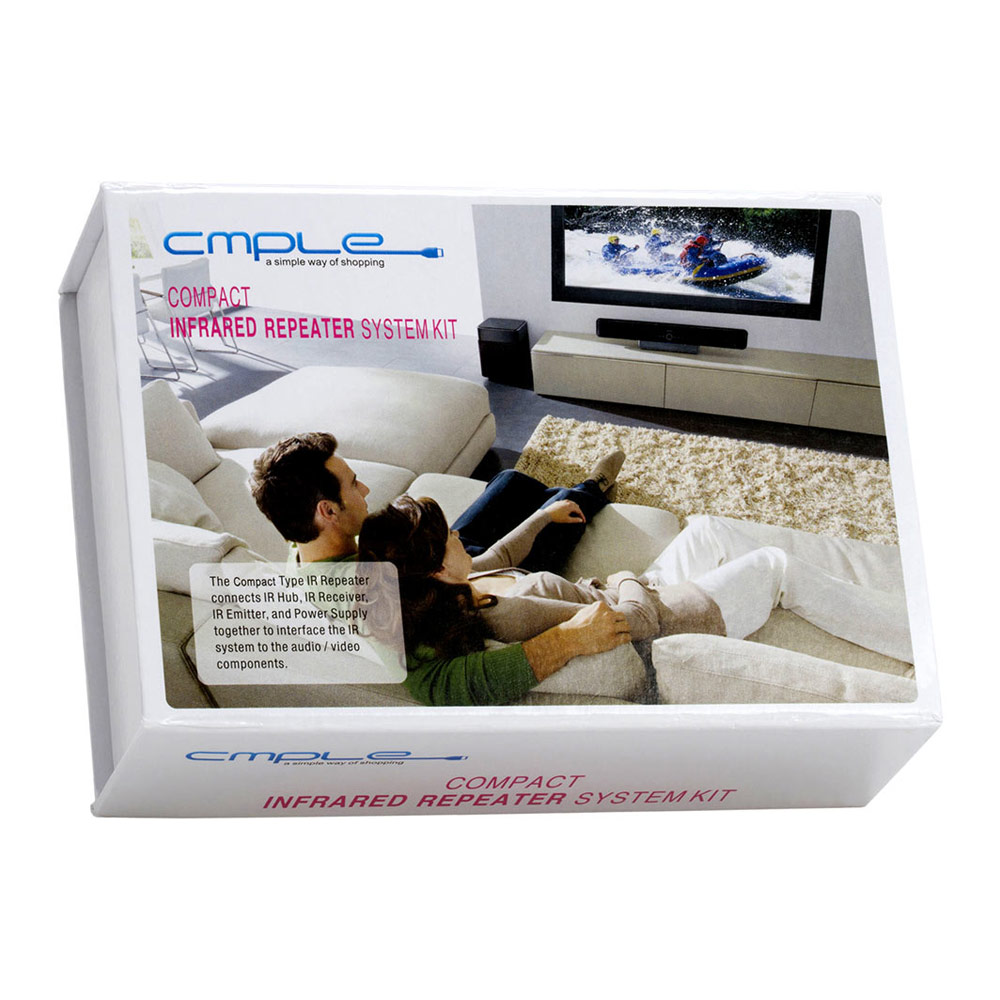 The repeater works in three stages. First, it receives the infrared signal from a remote control, and then converts the signal into an electrical one which can be transmitted either through a wired connection, or by radio frequency signals sent through all of your home theater or A/V wiring. Finally, when that signal reaches its destination, it is converted back into infrared light that the equipment will recognize. The process requires several different components to make this work, and they’re usually packaged together in what’s known as an IR repeater kit.

What’s In an IR Repeater Kit?

If you’ve followed us so far, you’ll guess that there are three necessary components.

The IR receiver, often called the “target,” is what captures the infrared signals sent by a remote control and converts them into electrical signals. The target is placed somewhere in the room with line of sight visibility. IR “emitters” convert the electrical signals back into infrared light recognizable by home theater devices, so they are placed on or near the equipment that’s hidden in a cabinet, closet or other room. And a “connection block” is the part of the electrical distribution system (EDS) that keeps everything working together and powered up.

Anything that sounds so simple usually isn’t. Here are additional considerations to keep in mind when buying an IR repeater.
Choosing the Right IR Repeater.

There are different types of devices which can be used as IR emitters, and the right ones for your system depend on your components. IR “bugs” are attached directly to the component, usually right on top of its IR receiving port. IR “blasters” can send infrared signals to multiple components, and IR “floods” are similar to blasters but put out stronger signals that cover a larger area. You’ll need to know the specifics of your system to choose the right emitters to use.

The same holds true for the IR frequencies the repeater operates on. There are two different bands on which remote controls send infrared signals, and some models of extenders only operate on one of those two bands. A single-band IR extender typically operates in the lower of the two frequency ranges and will be able to control components like Blu-ray and DVD players, but may not be able to control your HDTV as well. It’s necessary to either check the specs of your components before buying a receiver – or to purchase a dual-band IR receiver which can handle frequencies in either range.

Then there’s the issue of power. The more components that require an infrared signal, the harder the repeater will have to work, and some power supplies simply aren’t sufficient to handle a large burden. It’s usually not a problem if you buy a repeater kit because the kit will come with the proper number of emitters to work with the power supply; Cmple offers IR repeaters which can handle as many as 18 different devices. If you keep adding components and emitters individually, though, you may need to upgrade the power supply.

Choosing a location for the IR receiver can a problem if you’re using a basic system which relies on wires instead of radio frequency signals, since the wires limit where you can place the receiver. For this reason many customers choose advanced repeaters which rely on RF signals that can be sent as far as 40 or even 80 feet. That allows the receiver to be placed anywhere in the room.

It’s also possible that two different components will use the same infrared control frequencies, which means that both will respond to the same instructions even if they’re only meant for one of the components. This problem is most common when you have two identical components “stacked” on top of each other, such as two Blu-ray players from the same manufacturer. You can get around this issue when the components aren’t hidden, of course, by placing them in different spots and pointing the remote control directly at them. With an IR extender, however, there’s unfortunately no solution. You may have to keep one of the components in plain sight to be controlled independently.

Finally, some components, particularly satellite and cable boxes, can be overwhelmed by a powerful infrared signal sent by an emitter. Higher-level IR repeaters will allow you to adjust their settings to compensate, or you can use adjustable or low-power emitters to solve the issue.

As we’ve mentioned, IR repeaters aren’t expensive; our Cmple IR repeater kits cost less than $50. That’s a small price to pay for convenience, and an uncluttered home theater you can be proud of.