In the world of home theater, electronics and computers many terms are used interchangeably, whether or not they should be. Some terms are close enough in meaning that it doesn’t really matter which one is used, like patch cables and adapters, or jacks and ports. People get the right idea either way. However, when terms like HDMI switches and splitters are confused – as they often are – it does matter, because switches and splitters are essentially the opposite of each other. (Although one fact that complicates the issue is that combination splitters/switches can sometimes be found.)

There’s no reason to confuse the two once you have a basic understanding of their purposes, because the difference is simple. We’ll use TV monitors as an example:

Not that hard, right? Let’s look at two common examples

When You Need HDMI Switches and Splitters

Most newly-sold video components are connected via HDMI cables. However, high-def televisions often have just a few HDMI inputs. If you have a Blu-ray player, a streaming video set-top box, a PS3 and an Xbox 360 but only two HDMI ports on your HDTV, you won’t be able to plug all of your video sources into the TV at the same time. You’d have to keep unplugging and plugging in cables whenever you wanted to change what you had connected to the television. That’s when an HDMI switch becomes invaluable. You can plug one source into the television and the other three into an HDMI switch that’s connected to the second port, and easily switch between all of the sources.

Many people have HDTVs in several rooms, but only have one Blu-ray player or satellite receiver that’s connected to their primary television or home theater. If they want to show the same movie or sporting event in both rooms at the same time, they’ll need to split their incoming Blu-Ray or satellite feed so a second HDMI cable can carry it to the second HDTV. An HDMI splitter will do just that, taking one signal and splitting it so it can be transferred through two separate cables to two destinations.

There are other examples, but we’re sure you get the picture (even without using a switch or splitter). Let’s look at what you need to know before buying either of these devices.

When we talk about an HDMI switch that can select the video source you’d like to connect to your home theater or television, you’re probably picturing a box with a huge black knob on it. And you’re probably imagining that whenever you want to change the input signal reaching your TV, you have to get up from your couch, walk over to the box and turn the knob. That’s not the kind of switch we’re talking about.

Most modern HDMI switches operate by wireless remote control, and can be used in conjunction with infrared extenders and repeaters, to allow you even greater distance and to let you hide the switch out of sight. And some switches, called pigtails, don’t even have to be hidden because they plug into the monitor’s HDMI port and dangle unseen behind the TV. Most HDMI switches also have a feature which will automatically switch to a new device when you turn it on; in other words, if you turn on your Blu-ray player, the switch will immediately detect the device and switch your monitor to display the Blu-ray movie.

You can choose an HDMI switch to accommodate the number of video sources you have, from just two ports all the way up to five or even more. Most don’t need external power and will faithfully pass high-definition video and high-res audio video signals without any degradation or interference, as well as passing the digital content protection signals needed to play Blu-ray discs.

As long as you’re buying your HDMI switches from a reputable dealer (like Cmple), the only considerations you have to worry about are the number of ports, the style (box or pigtail) and any remote control features you’d like. The switch will take care of the rest.

A question we’re often asked about HDMI splitters is Can’t I just get a cheap extension, like a headphone splitter cable? You can probably guess that the answer is no, since we don’t carry cables like that, only splitter boxes. That’s because HDMI is too technologically-advanced to simply attach an extra set of wires and a jack, as is done with headphone extensions. The good news, though, is that high-quality HDMI splitters aren’t very expensive. 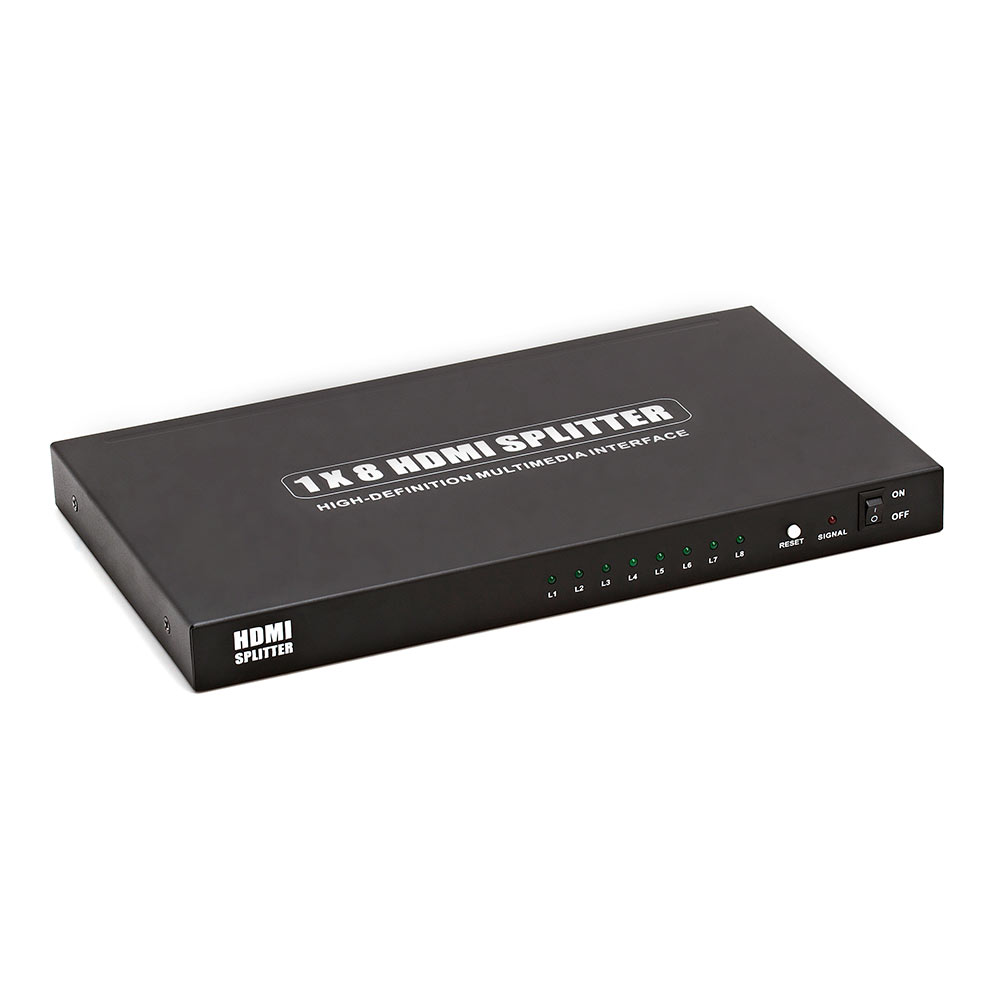 HDMI splitters can be chosen to handle two, four, eight or as many as sixteen different outputs; the latter option is useful primarily in venues like offices or sports bars while most homes will require fewer ports. Most splitters have remote controls, and as with switches, they can detect a newly-connected monitor and immediately feed it a video signal. Some units require external power, while others known as “passive” splitters don’t need outside electrical power. Passive units are more convenient and energy efficient, but may not have enough oomph to send signals to many monitors over long distances.

Splitters can transfer full 1080p high-definition video and high-resolution audio to all connected monitors without any signal loss or degradation, subject to distance limitations which are usually covered in the product description for each unit. They will also transmit the copyright protection signals required to watch a protected movie to each television that’s connected.

There is, however, one important fact you need to know before purchasing an HDMI splitter: the quality of the signal that each television or monitor receives is determined by the lowest resolution connected to the system. For example, if you have a 1080p HDTV and an older 720p television connected to a splitter at the same time, both will receive a lower-quality 720p signal. If two 1080p monitors are connected, though, they’ll both receive full 1080p HD.

That also holds true for 3D video; both monitors would have to support 3D in order for either one to get a 3D picture.