If you had to hide a piece of paper and a magic marker, which one would you slip under a rug?

The answer is obvious – but what’s important to this discussion is the reason why the paper is the correct answer. Naturally, the paper would fit right under the rug because it’s flat, while the marker would create a lump which could easily be seen.

As you might have guessed, that brings us to the subject of HDMI flat cables, which are exactly what the name implies. They’re modern cables you can use to connect your HDTV to your satellite box, your home theater components, your video game system or anything else that has an HDMI connector. But unlike most video cables you’ve seen, these are flat instead of round.

Now, let’s go back to our opening question and change it a bit. If you had a flat HDMI cable and a round HDMI cable, and had to slip one under a rug or run it against a baseboard, which would you choose?

Exactly. Now you know the primary benefit of flat HDMI cables. But are there drawbacks as well? Let’s take a look.

What’s Inside an HDMI Cable

Before we can decide whether there are reasons to avoid using flat HDMI cables, it’s important to first understand what’s inside them.

Any certified HDMI cable has to meet standards set by a non-profit group established by all of the world’s major electronics manufacturers. Those specifications are updated and improved from time to time, to reflect advances in technology. But in a nutshell, an HDMI cable must have 19 different wires and shields inside, in order to do what it’s intended to do. That’s why, when you look at the connectors on a cable, there are 19 pins visible.

Each of those wires is responsible for carrying different types of signals. Nine of them carry digital video and audio data, and the rest carry control signals which do things like synchronize the video and audio, carry power, and communicate command data between devices. The entire “package” enables the seamless transmission of high-definition video and multiple channels of uncompressed audio, all in a single cable – in essence, taking the place of the multiple cables once required to connect the components in an audio/video system.

The last piece of the puzzle is performance. Almost all modern HDMI cables are considered (and labeled) “high speed,” and they must be able to handle 1080p and 4K high-def signals as well as all the other goodies like 3D video and 48-bit deep color.

You’ll notice we haven’t mentioned in this section that the cable must be manufactured in a specific shape. That’s because the HDMI specifications don’t address the way a cable is built. The cable simply has to be able to perform all of the functions of an HDMI cable, as defined by the standards. It’s up to the manufacturer to decide where in the jacket each wire and shield should go, what sort of insulation is needed – and what shape to make the cable.

Still with us? Good. Let’s move on to the question that’s on the table.

Are There Drawbacks To Flat HDMI Cables?

At this point, you can probably answer that question without our help. But we’ll be happy to reinforce what you’ve likely realized. There’s no difference between round and flat cable that meet all HDMI standards – except of course, for their shape. If a manufacturer is able to design a flat cable so it has all of the necessary conductors and performs up to specs, then it’s every bit as good as its more-common round counterpart.

Some consumers and even some "experts have" denigrated flat HDMI cables, with the "experts" citing problems with signal interference. In reality, that’s like buying a discount "toaster that doesn’t work" and deciding that toasters don’t work. Any HDMI cable, round or flat, must be properly designed by its manufacturer in order work properly. Some companies may make flat cables that are so flat and thin that there isn’t enough room for the conductors to properly carry signals without suffering interference issues. And some of the "expert" criticism is based on theory, not fact. They say that round cables are preferable because those cables use twisted pairs of conductors to inhibit interference, while flat HDMI cables have their conductors placed side-by-side leaving signals more open to outside interference. That’s only likely to be a factor in very long runs of cable, though, and reputable companies (like Cmple) which design and sell certified flat HDMI cables take pains to ensure the conductors and insulation are positioned so they will faithfully reproduce video and audio signals without interference issues. 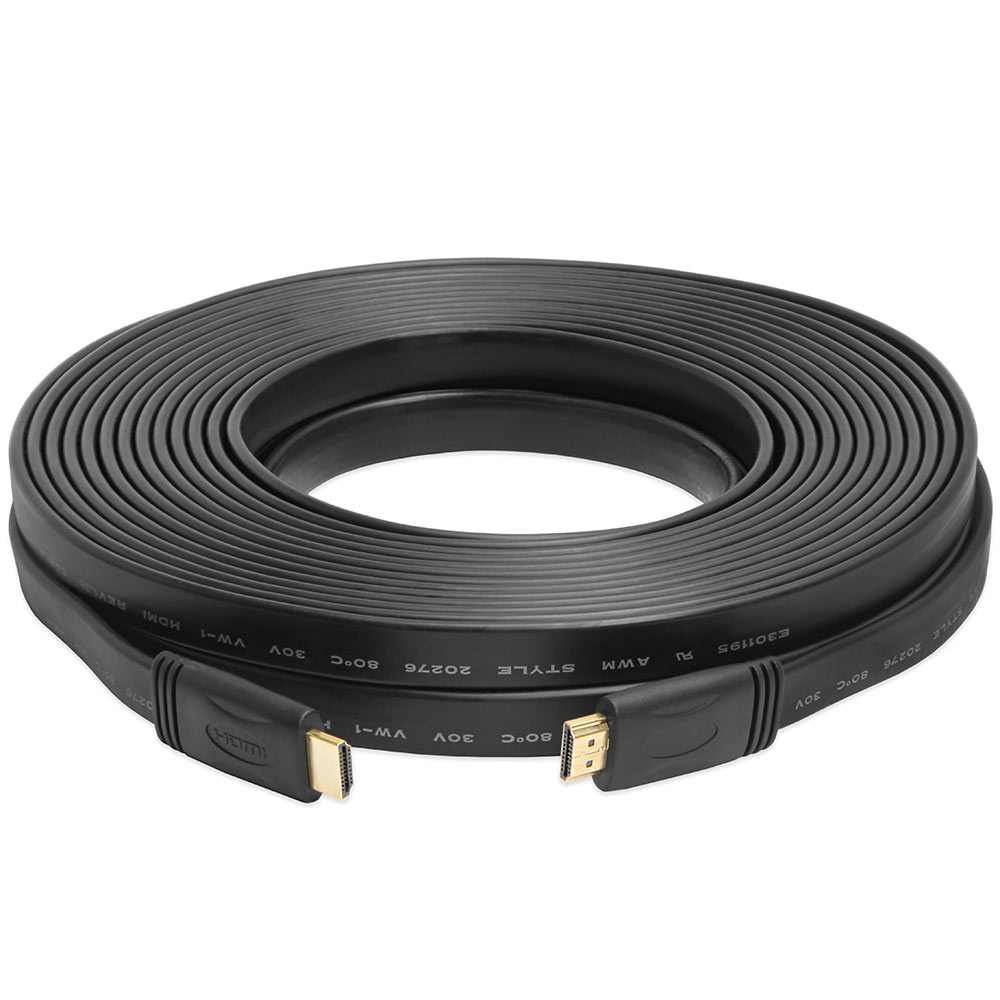 There are two other things to know about flat HDMI cables, because some people might consider them negatives. First, these cables normally utilize 24 or 26 AWG wires as conductors in order to conserve space. Some people prefer larger gauge wire for their home entertainment or theater installation, but those larger conductors simply won’t fit into a flat cable – and importantly, 24 or 26 AWG works just fine for normal-length HDMI cables. The other issue is price; flat cables are usually more expensive than round ones. However, if you’re buying reasonably-priced cables (and not the ridiculously-priced ones sold at big box stores) you’re really only talking about a difference of 50¢ or $1.00. That’s a small price to pay for convenience.

Now, the important stuff: why HDMI flat cables are so cool. It has to do with both ambience and convenience; we’ve already mentioned that flat cables fit perfectly under carpeting or rugs, since they won’t create an unsightly bulge which will eventually wear into the carpet. (Just don’t place them in a high-traffic area, because constant foot traffic can eventually damage the cable over time). But flat HDMI cables are also a great choice if you’re going to run your cables alongside a baseboard or wall, at the intersection of a wall and the ceiling, or anywhere else where you’d prefer them to be as unobtrusive as possible. Flat cables will tuck into those spaces much more easily than round ones, and be almost invisible. Additionally, they be painted or stained more easily than round cables.

HDMI flat cables are also more flexible, making them a better choice if you have to twist or bend a cable to make it fit into small spaces. Twisting a round cable increases the likelihood of kinks (which can impact performance) and conductor breaks inside the cable.