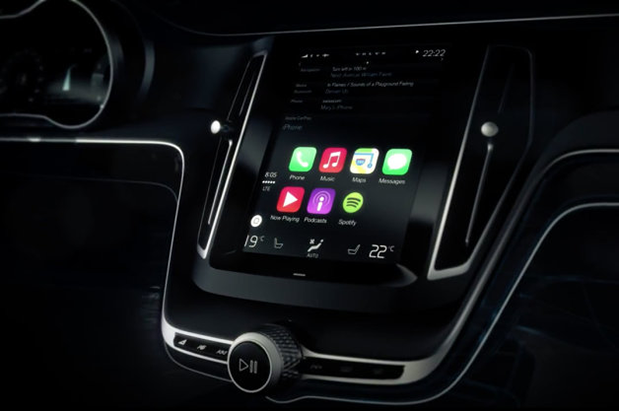 Apple’s CarPlay has been showcased by three manufacturers so far – Mercedes Benz in its C Class, Ferrari, and Volvo. Since Apple does not control the way the feature is integrated into the vehicles, the way CarPlay is accessed will depend on the car manufacturer. However, there are a few common features that CarPlay will bring to a car’s infotainment system.

Do not need an iPhone 5

To begin with CarPlay will be placed on top of the existing infotainment system that the car has, not replace it. This means that if you are out of cell phone coverage area, do not have an iPhone 5 or better, or something similar, you will be able to use the car’s infotainment system for navigation, communication, and so on.

Driving is the Main Priority

The CarPlay screen on the dashboard looks similar in all the cars and has only a few apps loaded and the icons are larger. This is to reduce driver distraction and make it easier to use when driving. The main apps are Apple maps, voice, audio, music, and messaging. To reduce driver distraction, Apple has made it impossible to message using manual typing. Instead you can only dictate the message to Siri, which will also read the messages you receive out to you.

Plenty of Songs to Choose From

Similarly, you can use Siri to navigate the music stations to select songs of your choice. The Apple Maps feature also works via Siri, in which case you can simply mention the business or location you need to reach, and the Map will help you navigate to your destination. The feature also integrates all addresses you received via email or messages on your iPhone.

The navigational aid makes use of aggressive location technology to ensure that you are not shown in the middle of the woods or ocean if you are out of cell phone range for a few minutes. Moreover, the maps also provide information about traffic and other road conditions even as you are driving.

Depending on the car you are driving, you can also enter addressed manually into the map system for navigational aid. However, it can be cumbersome in the Mercedes Benz as the COMAND system requires one to manually turn the knob for entering each alphabet.

Apple’s CarPlay will certainly make the infotainment systems in cars more useful and intuitive to use. As the system uses the same layout as the iOS, iPhone users should not find it difficult to begin using it. One needs an iPhone that has to be connected to the in-car system using a cable since it does not support wireless connectivity before it can be used.

Not all Apps will Make the Cut

While Mercedes Benz is likely to introduce a C-Class with CarPlay in early 2015, Ferrari and Volvo are likely to take longer to release models with CarPlay. Other carmakers have yet to make firm plays and release concepts.

The intense competition to have a presence in cars that Apple has felt given Google’s ambition to be present in this space means that Apple has ceded more control to carmakers about the way CarPlay will be made available. This means that each manufacturer has decided to use CarPlay in slightly different ways. Some have planned for a resistive touch screen, while other a capacitive touch screen, while Mercedes Benz does not offer a touch screen at all. However, being able to access messages, make calls, and check the map using Siri will be a definite advantage for Apple fans.