We’re all pretty familiar with what Ethernet cables look like, after years of working with computers and other wired devices in our homes and offices. Whether it’s to connect to an Internet router, a wireless access point or another network device like a printer, we use Ethernet patch cables on a regular basis.

Many of us also understand the difference between Cat5e cable and Cat6 cable; the one with the higher number (that’s Cat6, for the math-challenged) is the newer Ethernet standard, which is capable of higher data transfer speeds and does a better job of protecting against crosstalk and other interference. That information is crucial when you’re in a store or shopping online, and have to decide what type of Ethernet cable you need. You’ll ideally want to match the cable to the type of network (that is, Cat5e or Cat6) you have, although Cat6 cable is backward-compatible with Cat5e.

That’s not the only distinction you’ll have to understand when shopping, however – there’s also a set of three letters used to describe types of Ethernet cable. The professionals (or experienced amateurs) among us already know these cables have four twisted pairs of conductors inside. And since Ethernet cabling is commonly labeled as “UTP,” “FTP” or “STP,” even newbies can now easily guess that “TP” stands for “twisted pairs.”

But that still leaves the “U, “F” and “S” to decipher. Let’s see how easy we can make this.

A quick note about twisted pairs: the technique was invented by Mr. Telephone himself, Alexander Graham Bell, back in the late 19th century. Telephone cables originally had just straight conductors, but as electrical power distribution became common, interference from power lines became a common issue with the transfer of telephone signals. Bell found that he could greatly reduce the electromagnetic interference (EMI) that was created by nearby electrical lines simply by twisting the telephone conductor wires. That same breakthrough approach is still used today in Ethernet cables as an anti-interference measure; all of the types of cables we’ve mentioned use twisted pairs of conductors.

However, it’s not always enough. Some environments are prone to greater-than-normal amounts of EMI, so there are cables designed to provide even more protection against interference. The protection is called shielding, and it brings us back to “U,” “F” and “S.”

Normal twisted-pair Ethernet cables will usually perform just fine without extra shielding, when used in home and small office networks that don’t have lots of equipment that will cause EMI. Since it’s unshielded (“U”), it’s referred to as “unshielded twisted pair” cable (or UTP for short). It’s much less expensive to manufacture cables without extra internal shielding, so UTP is the least-expensive Ethernet cable you can buy.

With no stiff shielding material inside, UTP is the thinnest and most flexible Ethernet cable on the market, making it the easiest to work with and install. It also has the extra advantage of not requiring a ground connection; more on that shortly. The majority of Ethernet patch cables or bulk cables that you’ll see sold are UTP.

We now consider FTP and STP, which are each shielded Ethernet cables. The terms can be a bit confusing because they’re often used interchangeably, and each has extra components inside the cable in order to protect signals from interference. However, there is a difference between them.

FTP cable specifically uses a foil (“F”) shield wrapped around the outside of the twisted pair package, and does not protect the pairs individually. STP cable normally covers each of the twisted pairs separately with either foil or tightly-braided wire, with another layer of foil or braided shielding covering the entire conductor package. That makes STP cable fully shielded (“S”). As you’d likely guess, STP provides the best protection against EMI because of its several layers of shielding.

So how do you choose between them? It’s a balancing act, depending on how much interference your facility experiences and how big your budget is. An environment with lots of heavy equipment, high-powered electrical motors and fluorescent lighting is likely to generate enough EMI to require the use of STP Ethernet cable, even though it’s the most expensive choice, often twice as pricey as UTP or FTP cable. Significant but less intense interference may allow you to save some money by using FTP cable.

Several commercial situations definitely call for FTP Ethernet cabling. When you need the fastest data transfer possible or when your cable must cover long distances, the premium performance of FTP cable will make an enormous difference. It not only eliminates most EMI, but also prevents alien crosstalk that occurs at high speed between twisted pairs. FTP cable is useful in keeping signals secure from “eavesdropping” because the extra shielding prevents the signals from escaping. 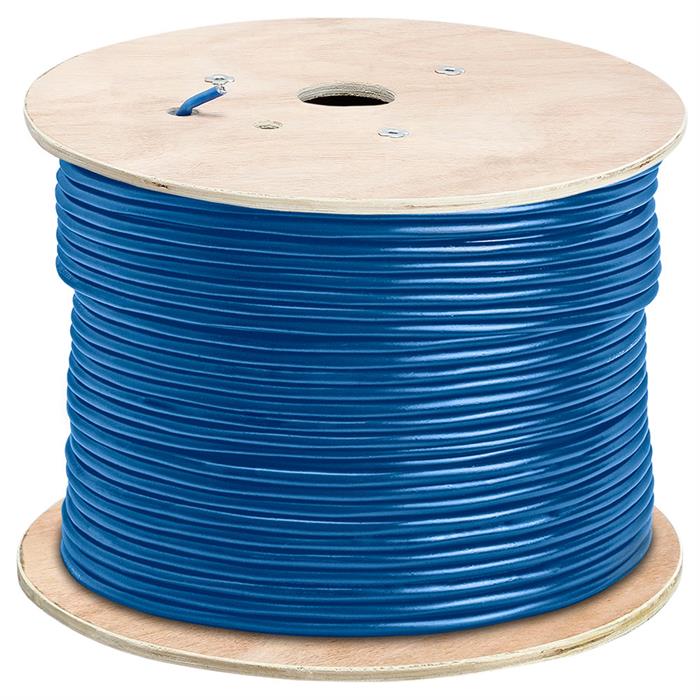 It’s more difficult to work with STP and FTP Ethernet cable because the extra shielding makes it thicker and stiffer, and because the need to keep the shielding intact makes the cable more fragile. Both types of cable also require a ground connection, since that’s where the interference snagged by the shielding is shunted. Shielded cables are best installed and maintained by professionals; of course, those are the people most likely to use them since UTP is sufficient for almost all home and casual applications.

Finally, a little extra information for the sake of completeness. If you’re confronted with a choice between straight-through or crossover cables, you’ll almost always want the straight-through cable. Crossover cables have some of the conductor wires reversed at the connectors, but are only used these days to connect to very old computers or network switches.

You may also occasionally come across variations on FTP and STP called ScTP (screened twisted pair, which is FTP with a braid instead of foil around the conductors), PiMF (pairs in metal foil, which is the version of STP that uses foil around each pair), or SSTP (double shielded twisted pair, STP with foil around each pair and braid around the package). Unless you’re an engineer or tech you probably won’t need to dig this deep; knowing UTP, FTP and STP will be more than enough.