In the electronics world, the common names for many components are anything but subtle. For example, most people are familiar with the terms male and female used for connectors; the “male” connector has a protruding plug which is designed to fit into a “female” receptacle.

That tendency toward blunt naming conventions should give you a hint as to what Siamese cables are. The first thing you probably think of when you hear “Siamese” is the common name used to describe conjoined, identical twins. The cables that bear the same name aren’t identical, but they’re sort of “conjoined” – two cables, designed for two different purposes, built into one jacket. 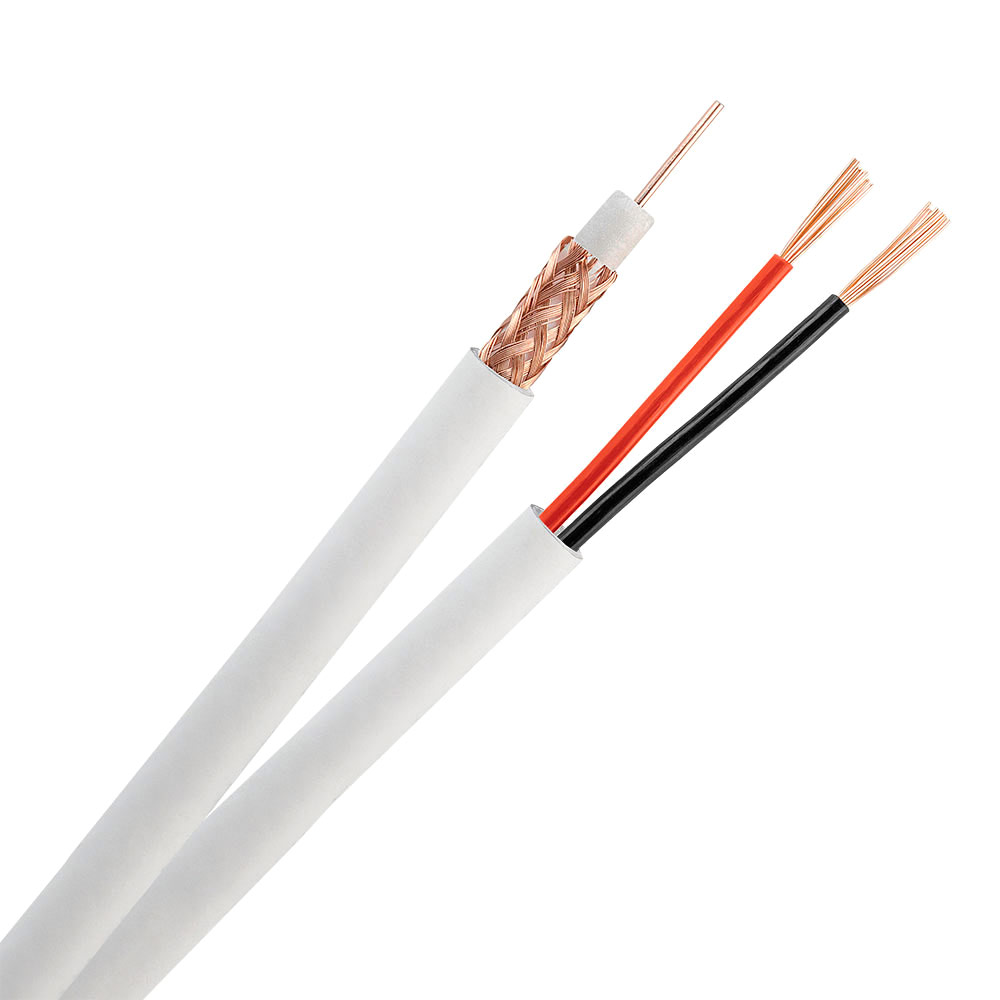 That leaves just two questions: what do Siamese cables carry, and what are they used for? 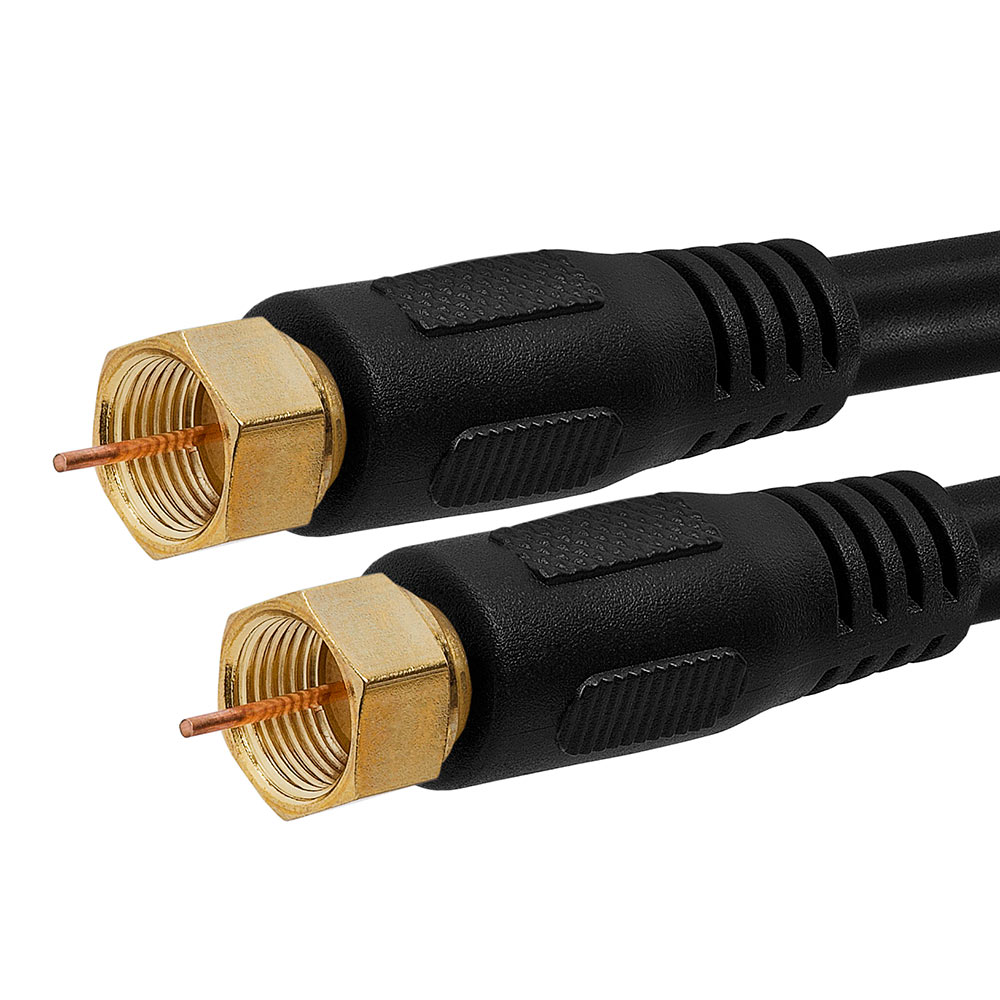 Oh, you still have more questions? Let’s see if we can help with those.

Why Are Siamese Cables Used?

One of the big problems installers encounter when putting in a wired closed-circuit TV system is that there’s usually no power available where they want to place the cameras. That requires two runs of cable, one for video and another for the power. That means almost twice the work, tying the cables together for the length of their run or making two completely different cable runs. All done? Great. Now do the same for all of the other cameras in the system.

Siamese cable, able to handle both video and power, makes things easy on installers. It is sold in bulk (usually in lengths of 500 or 1000 feet), can be easily run out from a box or spool and just requires the proper terminations on each end once it’s in place. If desired, Siamese patch cables can also be found for quick security camera hookups, usually in lengths between 25 and 150 feet. 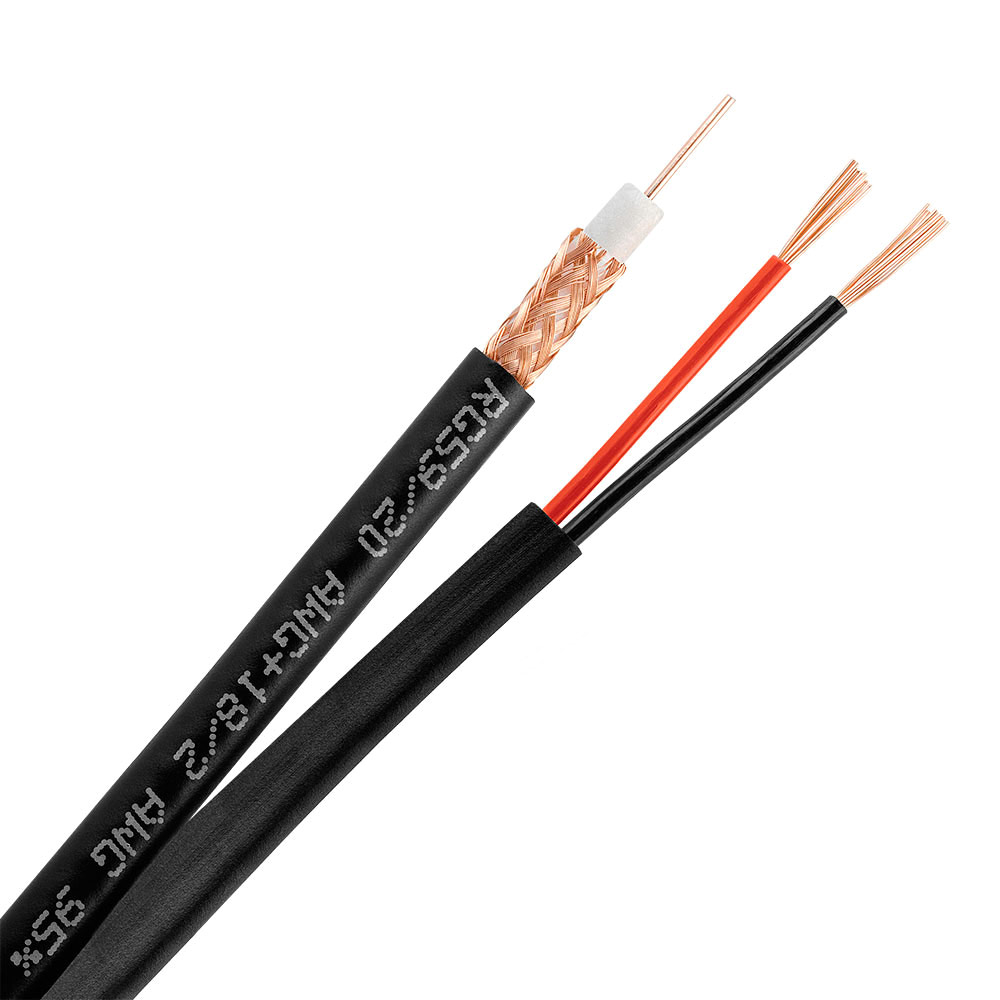 There is always the danger of interference when video signals and power are in close proximity. The construction of Siamese cables, with their heavy insulation and proper spacing between the coax and power cables inside, ensures that video transmissions won’t be subject to those interference issues.

You’ll find Siamese cable used for a wide variety of CCTV applications. Home security systems with wired cameras, larger commercial security systems and industrial surveillance installations all widely integrate Siamese cables for their ease of use and the amount of time saved on “duplicate” cable runs.

In short, Siamese cables were made with closed-circuit installations in mind.

There are several types of security cameras used in surveillance and monitoring systems, and Siamese cable is perfect for all of them. The coax can always be hooked up easily just by attaching the a male BNC connector to plug into the camera, monitoring station or DVR, since nearly all CCTV components provide female BNC jacks for the video connection.

Power connections are almost as simple. 12 volt DC analog and high-definition cameras simply require that the power cables have a 2.1mm male power plug attached, to connect to the camera’s BNC female connector. 24 volt AC or dual voltage cameras normally use a power terminal block, and the leads from the Siamese cable can connect directly to the block. And the cable connects similarly to a multi-camera master power supply box, if one is used on the system end. 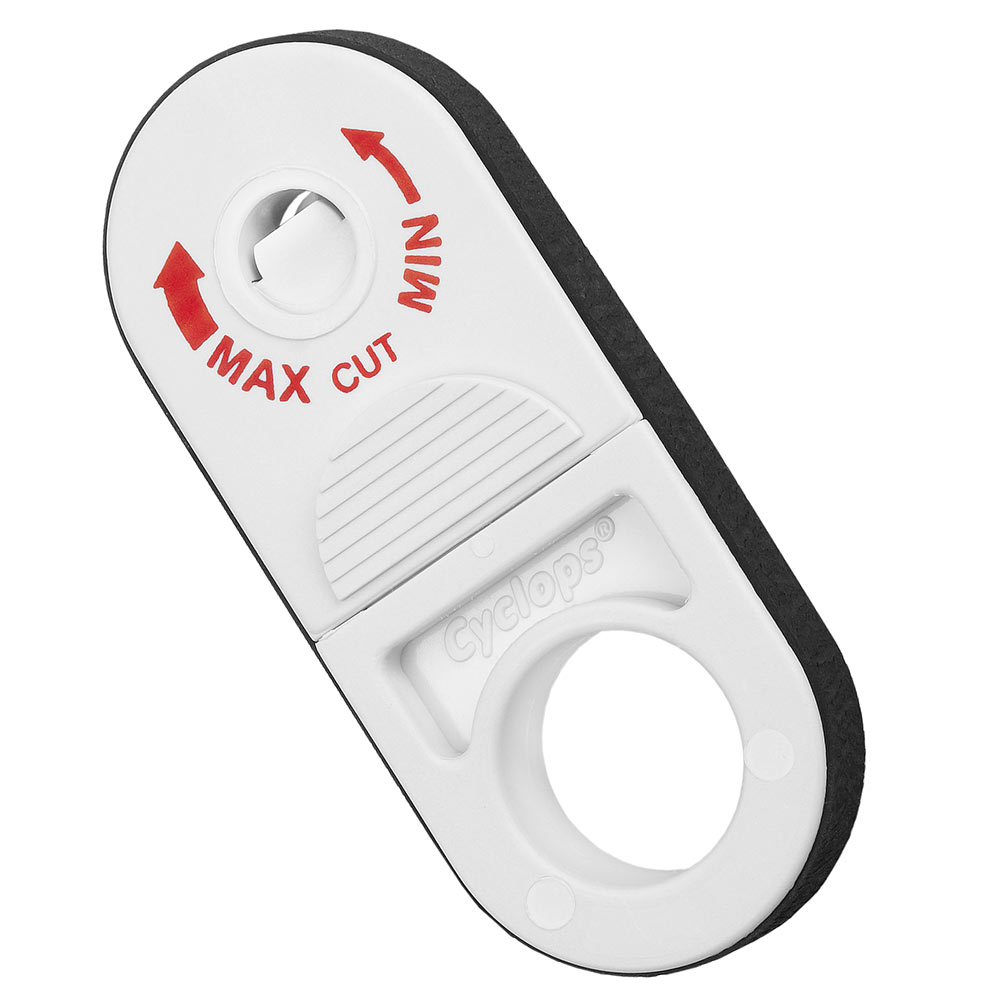 If attaching connectors to bulk cable sounds daunting, it shouldn’t – it’s easy with a little practice and a couple of tools. The professional’s preferred way to put a BNC connector onto the coax is to first use a spring-loaded TL-22 cable stripper to remove the insulation. When you rotate this stripper around the cable it automatically cuts at the right pressure and the right height, making two notches. You can then remove the top portion of the outer jacket to reveal the inner conductor, and the lower portion to reveal the conductor, shielding and core. Fold back the copper shielding, put a crimp-on F connector firmly onto the cable, and squeeze the outer grip ring of the connector with a TL-70 coax crimping tool. Presto! There’s now an F-connector on the coax. Just screw on an F-connector female to BNC male adapter and you can plug it right into your camera or DVR. It may sound complicated, but after a few tries the whole process literally takes only 30 seconds or so. 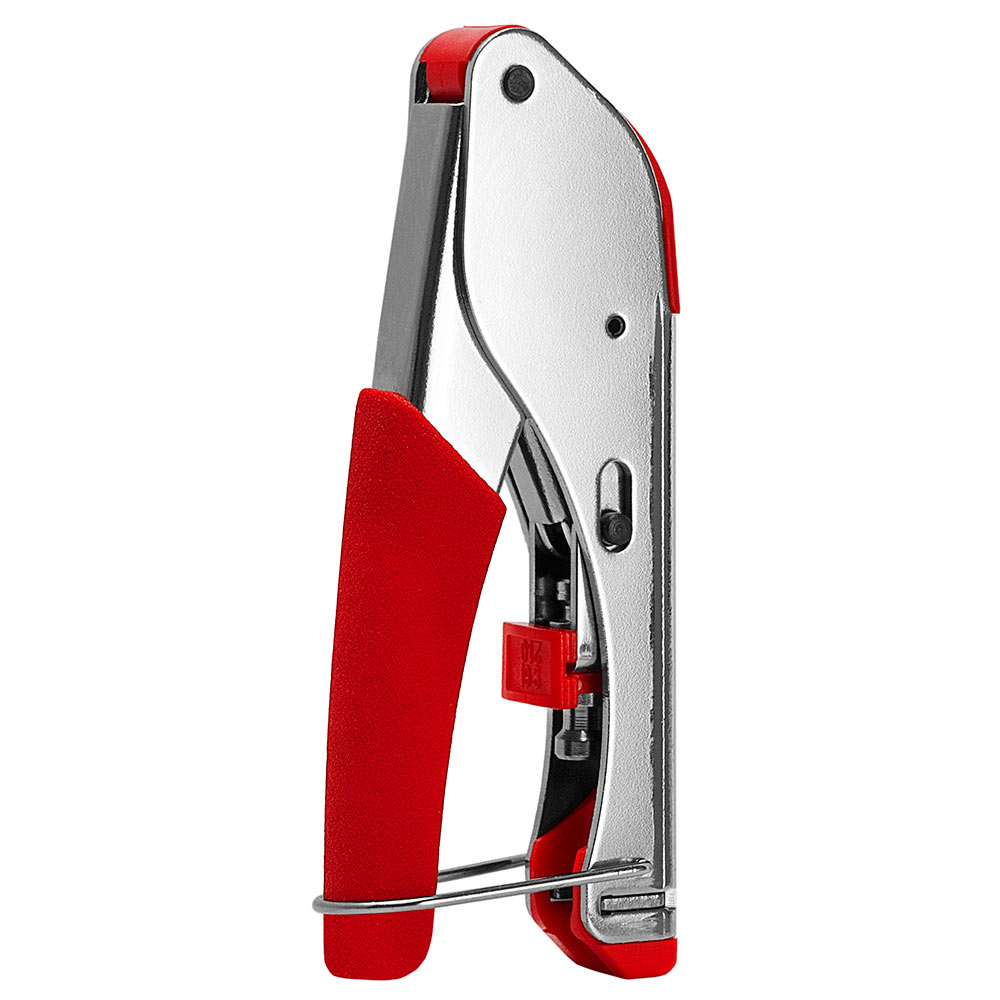 If you need a 2.1mm male power plug attached to the power cables in order to connect to a 12 volt DC camera, that’s even easier since it’s just a matter of attaching bare leads; butt connectors or B connectors are most commonly used for that task.

As long as you know how to strip cable and attach connectors the process takes no time at all, allowing you to focus on the truly time-consuming tasks: mounting the cameras and running the single length of cable. The only thing to be cautious of is inadvertent cuts to the Siamese cable while you work with it; any damage to the structural integrity of the cable, with power and video sitting so close to each other, could lead to interference problems. And naturally, make sure that the cable isn’t run close to any protrusions which could cause damage when the cable is pulled.

You will find a number of variations of Siamese cable on the market. Some is made with CCA (copper-clad aluminum) 18 or 20AWG conductors, but copper-clad steel or bare copper conductors are preferable. The shielding should be 95% braided copper, and since Siamese cable is rated just like any other coax, you should be sure that the cable you’re buying is rated properly for its intended use, such as in risers, plenums or outdoors. Cmple’s Siamese cables are all CL1, CL2, CM, CMX and CMG rated.

As mentioned earlier, you can also find Siamese cable patch cords cut to match specific cable run lengths, but since it’s unusual that a CCTV camera will be located exactly 25, 50 or 100 feet away from the control system, most installers prefer to use Siamese bulk cable that can be cut to proper length.