HDMI cables are a terrific convenience for anyone with an HDTV, and an absolute godsend for home theater enthusiasts who have multiple components to connect. They transfer both digital video and audio – without signal loss – in a single, easy-to-use cable, they can handle audio return and digital copyright signals, and many can even carry internet signals as well. 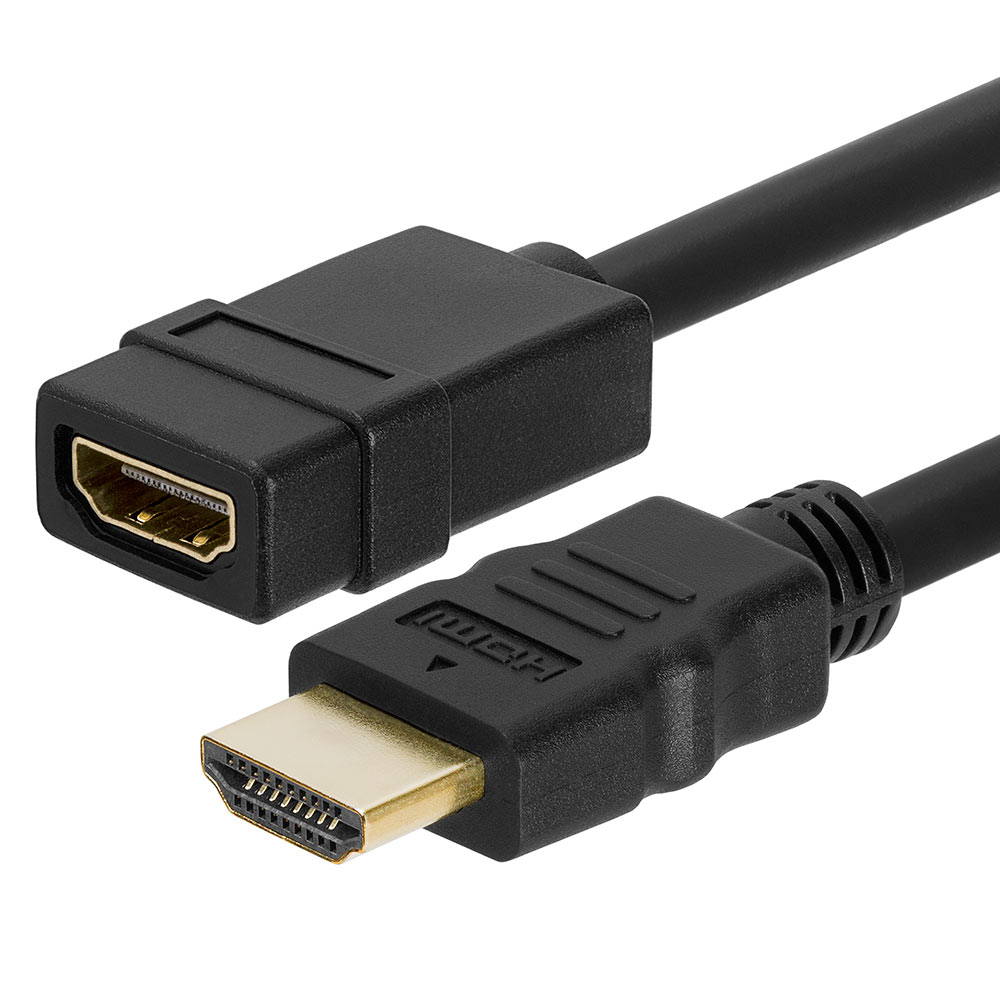 There’s only one potential problem with HDMI cables: the standard length for these cables is either three or six feet, which often isn’t long enough to connect to a Blu-ray player or gaming console. That’s when HDMI extensions become invaluable.

The only problem with early versions of HDMI was that the required connector size made it impossible to use HDMI cables with smaller devices. The large connectors at each end were much too big to accommodate any ports which would fit on camcorders, cameras and other portable video units.

What Is An HDMI Extension?

Many of the concepts you encounter when building a home theater are difficult to understand. Thankfully, this isn’t one of them. An HDMI extension is the equivalent of the good old electrical extension cord you’ve used your entire life to bring AC power from a wall outlet to an appliance halfway across the room. HDMI extenders have different types of wires inside, and different types of connectors on each end, but they serve the exact same purpose. They extend the reach of your existing HDMI cables, allowing you to connect components which are too far away to reach with the cables that came with your equipment or that you picked up at the store.

In most cases, an HDMI extension looks just like the HDMI cable you use to connect high-definition televisions and video components. It’s a relatively thick cable with a male connector (the one with a protruding metal casing with pins inside) on one end, and a female connector (the one with a recessed socket) on the other. The way you use this cable is almost identical to the way you use an electrical extension; male plugs fit into female sockets. In this case, the male connector on your existing HDMI cable plugs into the female socket on the extension, and the male end of the extension plugs into your component or device. Poof! Your signal will now travel all the way between source and destination, with perfect quality.

There are other versions of HDMI extension cables which have male connectors on both ends, or female connectors on both ends. It’s unusual that you would need one of those, though, so when you’re purchasing an HDMI extension the only decision you’ll normally need to make is how long the extension should be. Of course, that depends on how far apart your components are – but you should have no trouble finding the length you need. At Cmple, we sell HDMI extensions as short as 1½ feet and as long as 50 feet, and most vendors do the same. Why is 50 feet the maximum length? We’ll get to that in a minute.

If you’re setting up (or have already assembled) a home audio/video system or home theater, you’ve undoubtedly paid careful attention to the quality of your HDTV and components. After all, this stuff isn’t cheap, so you certainly want to get the most for your money.

Here’s the good news about HDMI extension cables (and HDMI cables in general) that you probably won’t hear at your local big box store: you don’t need the fancy, high-priced HDMI cables that salespeople often push. Any cable that is HDMI-certified will deliver perfect digital signals from one end to the other, because it’s been manufactured to meet the necessary specifications; our reasonably-priced Cmple HDMI cables, for example, do exactly the same job as an expensive Monster Cable. And more good news: any brand of extender will be compatible with any brand of HDMI cable, because they all have the same connectors and meet the same specifications required for transmitting digital signals via HDMI.

There is one consideration that’s important when you’re buying an HDMI extender – the connectors on each end should be gold-plated. That isn’t for appearances; the gold-plating helps assure signal conductivity, while preventing the eventual corrosion which can occur on non-plated connectors. It’s a common design feature, and you’ll it on most quality cables and extenders (including ours).

The one issue we haven’t discussed at length is audio. That’s because the audio signal associated with a video signal is automatically transmitted through an HDMI cable, and extenders seamlessly transfer both audio and video. They each arrive at the destination component exactly as they started out, with no signal loss whatsoever. The only exception is if you’re trying to use what’s known as a DVI-to-HDMI splitter as an extension cable to carry video to a device equipped with a DVI port. DVI does not support audio, so the sound associated with the video will never make it to the end of the cable. A DVI-to-HDMI extender should only be used if you don’t care about hearing audio or if are going to use a separate audio extension cable.

How Far Is Too Far?

We’ve mentioned that Cmple and other manufacturers offer HDMI extension cables as long as 50 feet. Why only 50 feet? HDMI wasn’t designed to cover distances longer than that, and video transmissions can degrade or fail if the cable run is too long. If the component you want to connect is further away, the video signal will need some extra help to make it all the way without a problem.

The most common approach is to add a signal amplifier, sometimes called an HDMI signal booster or extender, either between the original cable and the extension or at the end of the run. Some HDMI cables longer than 50 feet can be purchased with a booster already built in. Another handy add-on is a transformer called either an HDMI repeater or restorer, which reconstitutes an HDMI signal back to its original specifications free of any digital noise. A similar device is an HDMI equalizer or enhancer, which uses different technology to do pretty much the same thing.

Those techniques usually work, but sometimes aren’t good enough if the signals have to travel a very long distance. In those cases, either sending the HDMI signal over Category 6 Ethernet cable with the help of a transformer known as a balun, or using very expensive fiber optic cable, will get high-def digital signals anywhere they need to go without any loss of quality.

Of course, the best option would be to move the devices closer together, so simple HDMI extensions would serve the purpose. They’re inexpensive, easy to use, and will soon be as ubiquitous as those old AC extension cords.