Anyone who’s been using audio equipment for any length of time probably has "the box." It might not be an actual box; it could be a shelf, a corner of a closet or a desk drawer. But whatever form it takes, it’s in most homes: the area where old cables, adapters and connectors get tossed, get tangled up and are left to die. You might tackle "the box" every so often when you’re in desperate need of a particular adapter or connector, but you know in advance that you’ll never find what you need in "the box." 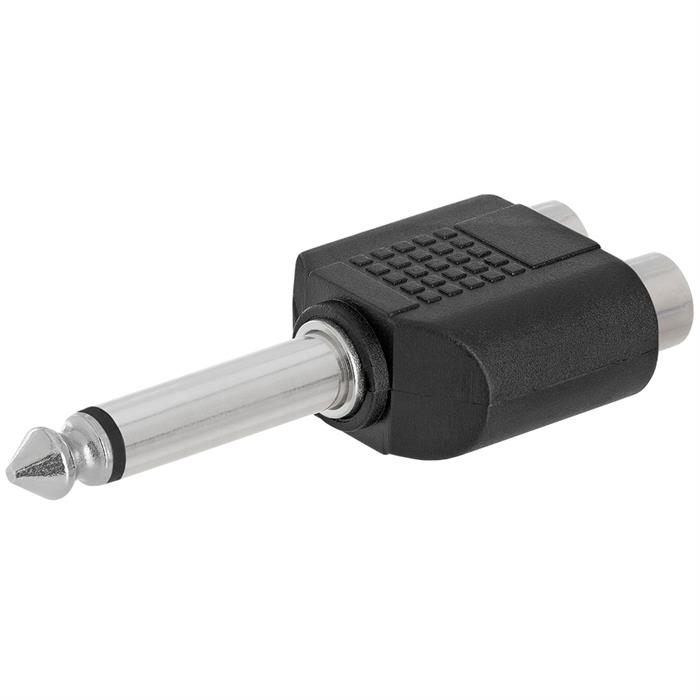 Many people are confused between the terms "adapter" and "connector." They’re often used interchangeably, but actually mean two different things.

A connector (often called a plug or the “male end”) is the hardware at the end of a cable which plugs into a port (often called a jack or the "female end"). For example, the cable you use to connect your TV to a satellite or cable box, DVD player or Blu-ray player has connectors on each end; they could be HDMI connectors, RCA connectors, or F-type coax connectors depending on the type of port they’re being connected to. When you purchase a connector, you usually have to manually attach cable wires to it before it can be used.

An adapter allows connections between devices which have different styles of ports, ensuring that the signal will make it all the way without distortion. Most often, an adapter will look as if two connectors – or a connector and a jack – have just been attached to each other; they have, but the internal works have been carefully designed to be convenient while still doing the job properly. One common adapter most people will remember was the one once required to connect a three-prong appliance cord to an old-style wall outlet.

he equipment in a modern audio system or home theater is likely to have "incompatible" plugs and jacks; in order for them to send audio signals back and forth, you’ll need to use cables with the proper connectors or adapters. Unless you’re a do-it-yourselfer, you’re more likely to be shopping for audio adapters than connectors because the latter require work, but the former are "plug and play." Either way, Cmple has you covered.

Most often, female-to-female adapters are used to join two cables with different connectors. Female to male adapters are usually plugged onto one end of a cable, with the male plug on the adapter then connected directly to a component’s port. However, some cables are manufactured to perform the function of an adapter all by themselves, with one type of plug on one end and a different type on the other. As we’re sure you’ve guessed, these are called "adapter cables;" the cable connecting your TV to a cable box or Blu-ray player that we mentioned earlier might be an adapter cable. But the most common usage of these cables in audio systems is as a "splitter adapter."

You’ve probably used a splitter adapter without knowing its name. When you need to attach two sets of headphones to a single audio output, the cable that plugs into the audio source and terminates in two different headphone jacks is a splitter adapter. It "splits" the audio signal so it can be used by more than one component or device.

Cmple carries several types of adapter cables and splitter adapters, all manufactured to our exacting standards and sold at our always-low prices.

How To Choose the Proper Adapter

Until you reach that level of familiarity with your audio equipment, you should rely on your owner’s manuals or the manufacturers’ online guides to learn what types of connectors you have on your components, in order to choose the proper adapters. For example, a ¼ inch (6.35mm) mono phone jack looks very much like a ¼ inch stereo jack – but one will transfer stereo signals, and the other won’t. You’ll be very disappointed if you purchase an adapter which doesn’t do the job you need it to do, so don’t go by “sight” unless you’re completely familiar with the different types of plugs and jacks.

Some of the most common audio adapters required in home theaters and audio installations include those which allow connections between 2.5mm and 3.5mm plugs and jacks, splitter adapters which convert two RCA plugs to a single stereo plug (or a stereo jack to an RCA plug), and 3.5mm plugs to 6.35mm plugs. If you have older equipment, you might need mono-to-stereo adapters. Cmple carries all of these adapters, and many more.

Optical TOSLINK cables are being used more and more often to transmit audio signals between multiple devices in home theater systems, because they convert audio signals into pulses of light and deliver the very highest quality audio possible. That often poses a problem, because not all devices are equipped with TOSLINK connections. Cmple carries a wide ranges of TOSLINK audio adapters, converters and extensions, to accommodate components with standard digital or analog audio connectors.

Whatever type of audio adapter or connector your system requires, Cmple has it at the lowest price you’ll find anywhere – as always, manufactured to our demanding quality standards.