A Complete Guide To All HDMI Versions And Specifications

It’s terrific that engineers are constantly working to improve the performance of our audio, video and Internet systems and cables.

It’s also frustrating that new versions of the standards governing performance are continually updated – and that the equipment and cables we’ve purchased are “yesterday’s news” sooner rather than later. Thankfully, a lot of the “new stuff” is backwards-compatible with the old (meaning new equipment works with existing cables and connectors), so we don’t have to keep replacing cables every couple of years. Even so, it can be a chore to keep up with what all of our equipment and cables can and can’t do. 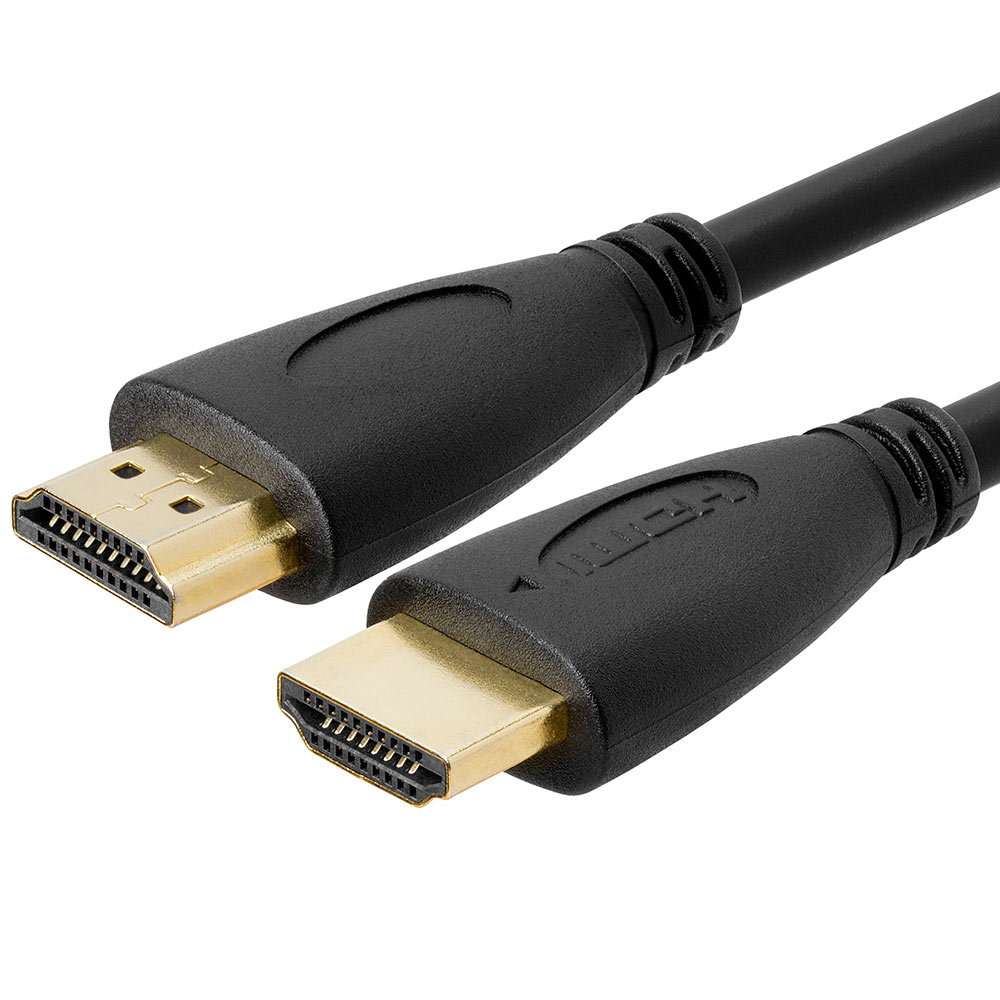 The HDMI cables we use to connect our HDTVs and home theater equipment are no exception. There have been seven different major versions of HDMI since it was introduced in 2002. Each has been better than the last, of course, but keeping track isn’t easy.

Fortunately, you have the Cmple Learning Center to rely on. Here’s an easy-to-follow (we hope) guide to all of the HDMI versions and specifications that have been released. And yes, you can breathe easy – they’re all backwards-compatible. 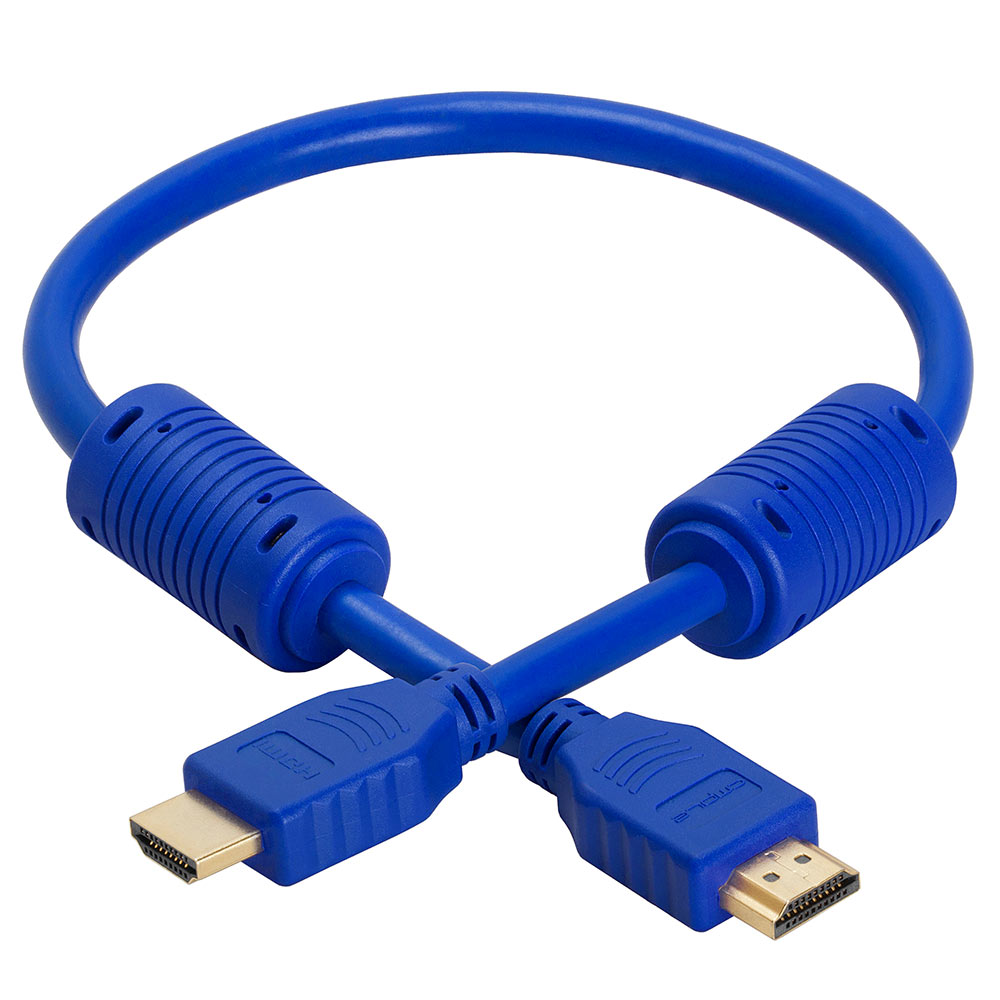 One other note: as of the early 2010s, HDMI-compatible equipment and cables are no longer allowed to be marketed or sold by version number, so you won’t see HDMI 1.4 or HDMI 2.0 cables at Cmple or anywhere else. The products can only be marketed with lists of their features, but it’s easy to look at a cable’s features and figure out which HDMI version it is.

Specifications for the early versions of HDMI were set long before most of us had heard of the interface or knew what it was capable of doing. In fact, HDMI 1.1 replaced version 1.0 in 2004, almost immediately after the first consumer products utilizing HDMI were released. At that point most of us still had old-school TVs with VGA, component or composite connections.

HDMI 1.0 (December 2002) was a very rudimentary, single-cable implementation of the technology – but it was revolutionary because it could carry both a 1080p high-definition video signal (with 8-bit color) and eight channels of 24-bit audio on a single cable with a maximum bandwidth of just under 5 Gbps. Believe it or not, many cable companies still use HDMI 1.0 for home cable box connections.

HDMI 1.1 (May 2004) didn’t include many changes to the standards. Basically, the only upgrade was support for DVD-audio (the audio format, not the sound coming from a DVD player), as long as both the source and destination were both HDMI 1.1 compliant. This is the version which many of us used with our first-ever HDTV. 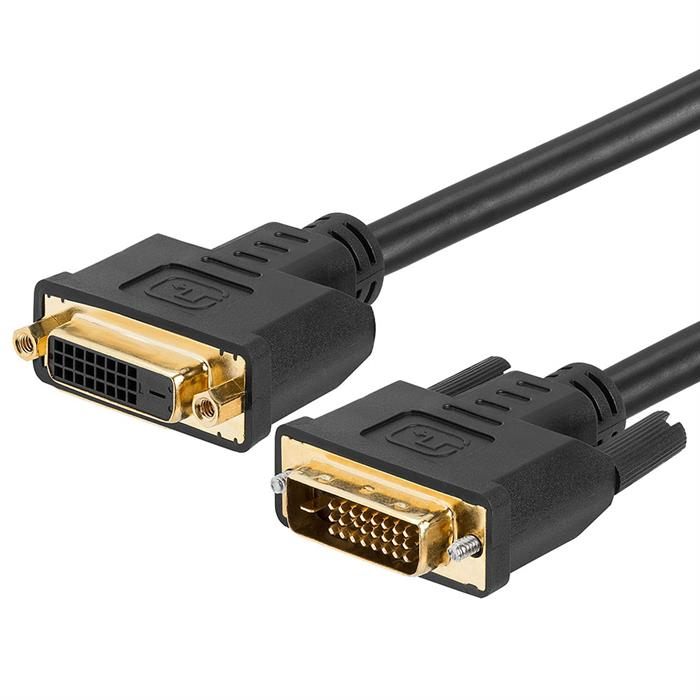 HDMI 1.2 (August 2005) saw the first important improvements in HDMI standards. Many changes were designed to facilitate the technology’s use with computers, in an effort to compete with DVI. A PC’s native RGB color space was supported in addition to the YCbCr color space used by TVs and other electronics, and a special Type-A connector for computer usage was introduced. This version also added One Bit DSD audio, making it the first to support audio from universal DVD players. Four months later version 1.2a was released, in an attempt to making HDMI’s promised CEC feature (interoperability between all devices) actually work on all devices. That one didn’t work as well as expected.

HDMI 1.3 (June 2006) was a major update, but not an immediate success. Added features were a bandwidth increase to 10.2 Gbps, support for the xvYCC color space and 16-bit Deep Color (at the manufacturer’s option), as well as native DTS Master Audio and Dolby TrueHD Audio. The problem: cable manufacturers weren’t prepared to be able to deliver high-def signals under the 1.3 standards on cables longer than 20-25 feet. It took a while for them to catch up. Four incremental updates to HDMI 1.3 (1.3a, 1.3b, 1.3b1 and 1.3c) were released between 2006 and 2008, but none had any effect on consumers or consumer products. 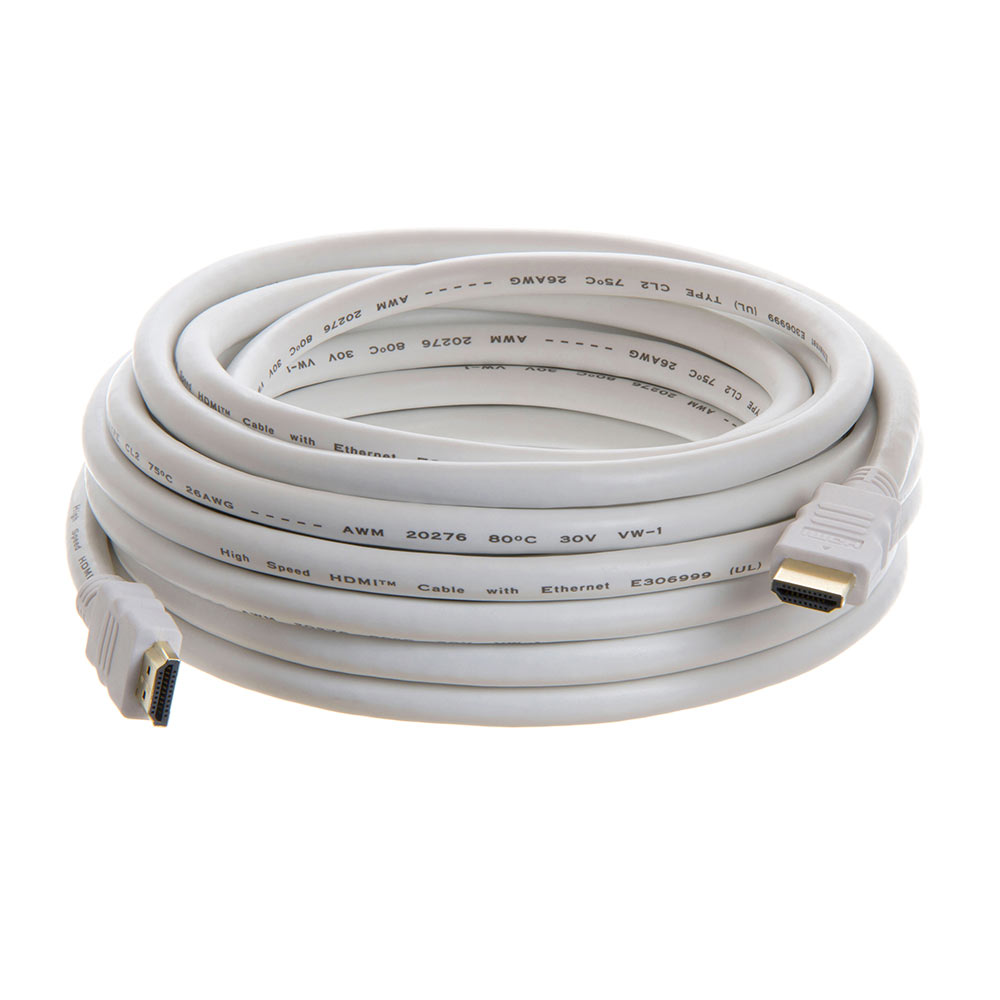 HDMI 1.4 (May 2009) saw huge changes to the standards. It was the first version to support 4K x 2K and major 3D video formats (but only at 24-30 Hz), the first step in supporting technologies still considered cutting-edge today. It also included the Audio Return Channel, which allows HDTVs to send extra audio data over the HDMI cable without requiring a separate connection, as well as defining Ethernet over HDMI (but good luck finding equipment that supports that feature, even today). New color spaces for computer graphics and digital photos (Adobe RGB, Adobe YCC601 and sYCC601) were also added, as was the HDMI micro connector for smaller devices. This was an enormous step forward. Two incremental updates (1.4a and 1.4b) allowed for use of broadcast 3D formats and 3D HD, respectively. 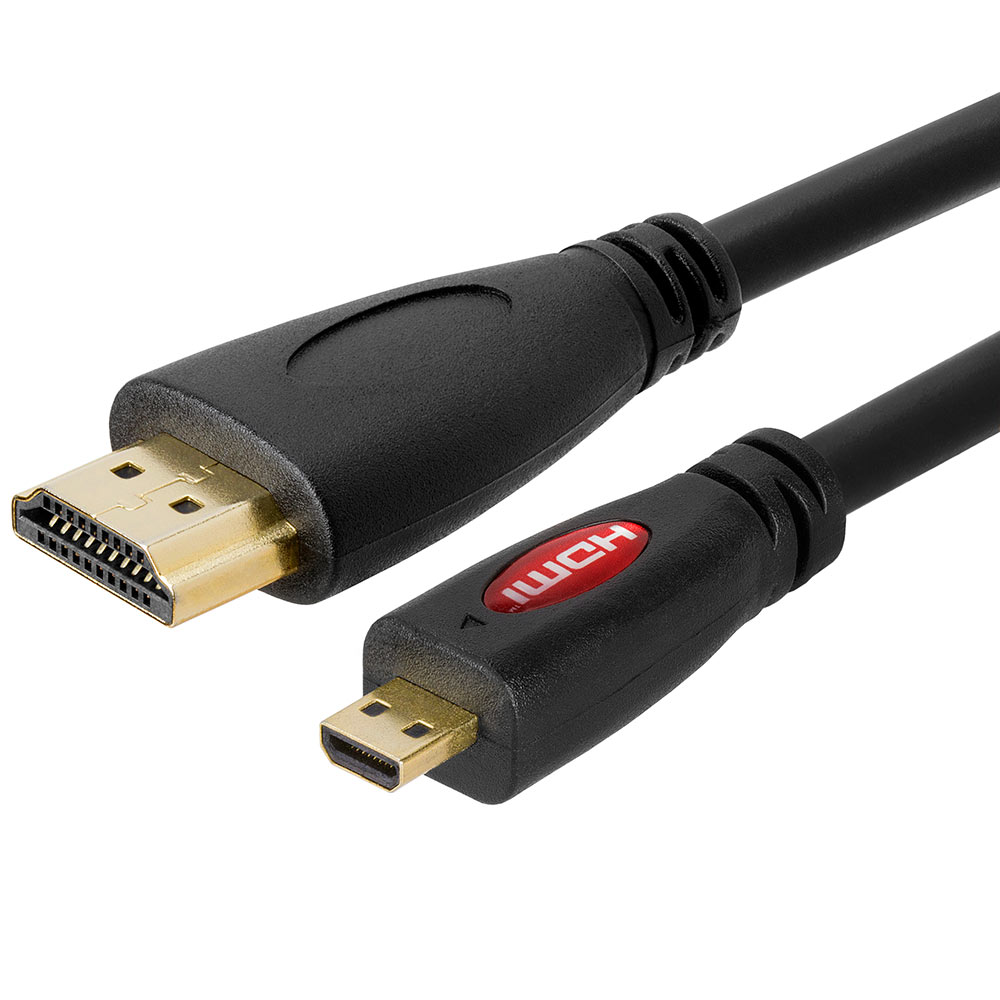 Welcome to the present.

HDMI 2.0 (September 2013) upped bandwidth capacity to 18Gbps, allowing for delivery of 4K video at a full 50/60 frames per second – that’s full support of the 4K video signals we expect today on new HDTVs – as well as the 21:9 wide angle theatrical display format and better 3D video. It also provided for delivery of dual video signals for more than one user and multiple-stream audio for up to four users, carriage of as many as 32 audio channels with sample frequencies up to 1536 kHz, improvement of the CEC control function, and a number of less-important improvements. HDMI 2.0 cables are the ones still in use today, and it’s able to provide all of the functions we now take for granted. HDMI 2.0a (April 2015) added support for the HDR (High Dynamic Range) video that is quickly becoming the new golden child in the industry. 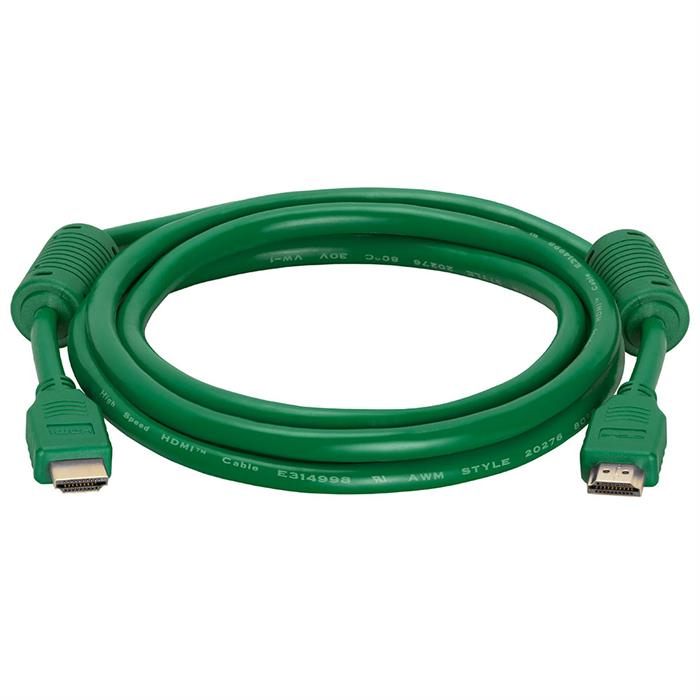 But the story isn’t over…

Initial HDMI 2.1 standards were announced in January 2017 and the new version is expected to be used in consumer products early in 2018. Improvements will include an increase in bandwidth to a whopping 48Gbps, support for video resolutions up to 10K and frame rates as high as 120 fps (but 2.1 cables will be required for those new resolutions and frame rates), and some other improvements which haven’t yet been announced.

For now, if you’re upgrading or putting in a new installation, just go with the latest HDMI 2.0 cables available in all lengths, ratings and colors at Cmple, at our always low prices and high-end manufacturing standards. It will be quite some time before equipment catches up to the capabilities of HDMI 2.1.
0
Featured products